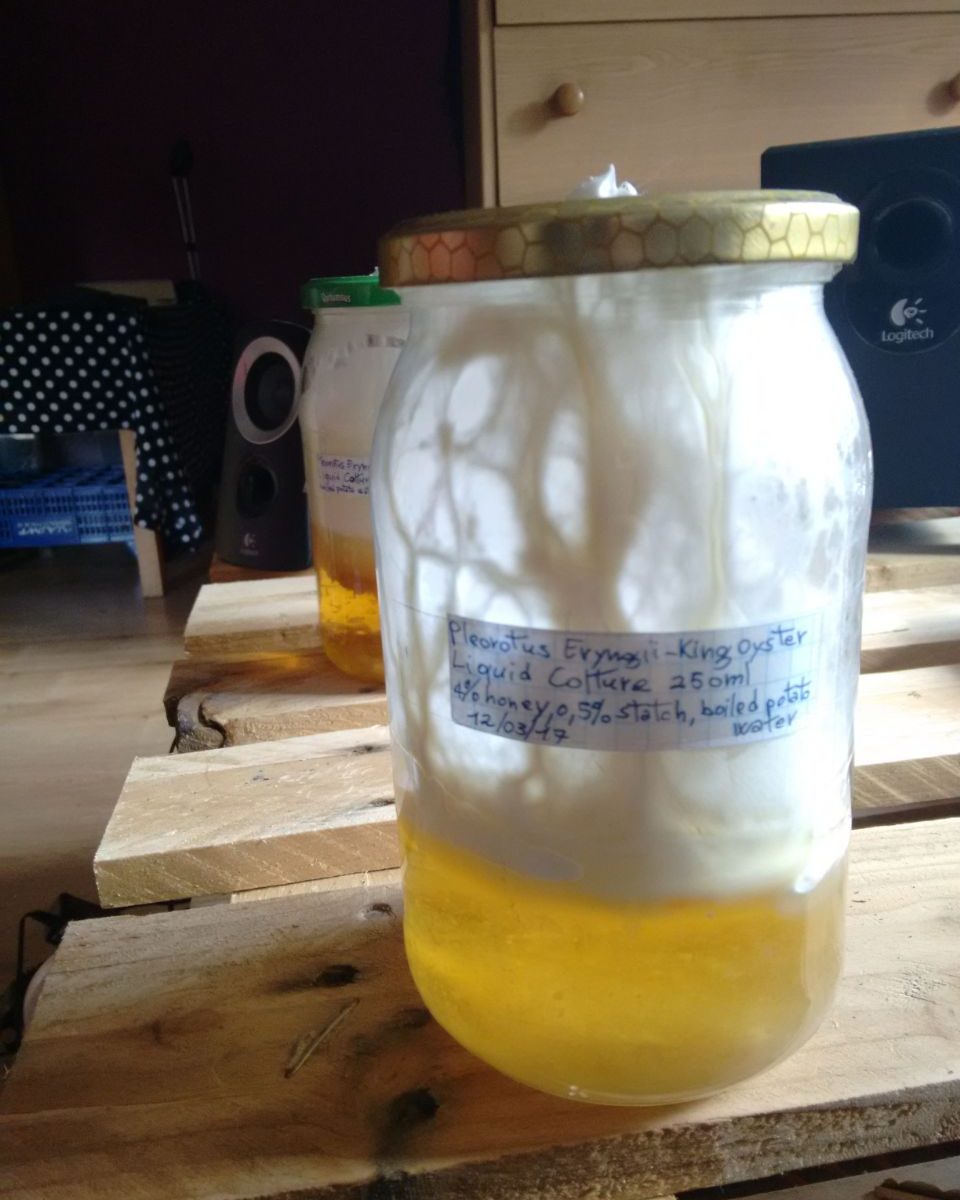 Today I will write about making your own liquid culture for mushroom growing.

The liquid culture is a liquid mix of nutrients that will help the mycelium to grow healthy prior to inoculation. It’s very effective cause with a very little amount of liquid culture you can inoculate directly a big amount of soil or spawn.

I used as a base something that you can also buy in the dedicated shop ready to dilute in water called PDA (Potato Dextrose Agar). Of course I didn’t buy it, but I did my own version 😉 maybe less effective but still valid.

I boiled 4 potatoes in a liter of water for a while, then eat the potatoes and kept the water. The water is now rich in starch and other nutrients, something that mycelium is hungry of. Remember to filter the water with a piece of cloth, to ensure no remaining of potato goes into the jar: I don’t know if mycelium likes potato 🙂

Then I added around 4% of biologic honey (don’t add more than 4% as too much sugar will kill the mycelium), a small amount of dried potato starch (0,5 %, I think it was one tea spoon).

I managed to make around 1 liter of liquid culture, so I closed it in 4 jars, having 250ml of LC on each. Note the size of the jars, the mycelium needs lot of air in this form to properly develop, but you can fill the jars more (i.e. half of the jar).

It’s not very visible from the photos, but the jars have 2 holes.

One is the air-filter: put a hole on the lid with a screw-driver and a hammer, then fit a cigarette filter through it, then white silicon (if you have transparent is also fine) all around bottom and top to seal. Place this one on the center of the lid.

The other one is the so called self-healing port. This is just a hole with silicon, that is used to take the liquid culture once is ready with a syringe. The silicon is so gummy that will close itself (self-healing) after the syringe goes out. Place this one on the side of the lid, to facilitate the entrance of the syringe that will have to reach the liquid by turning the jar.

This passage is basically always the same:

Clean all the surfaces and tools (plate, cutter) with alcohol. Wash your hands and put alcohol on them. Put some cover, like a t-shirt, on your mouth and hair to stop breath and bacteria going into the jar.

Then take a fresh mushroom, flame sterilize the cutter if you want, then cut out the outer skin of the stem, and take a small – this time REALLY small – piece from the internal part of the stem. I did this with Pleorotus Eryngii (King Oyster Mushroom).

Put the small piece inside the jar and close it fast.

That’s it ! Place the jars in a warm (20-25C) and dark place. After 2 weeks to 1 month you should see some changes in the structure of the liquid, and at the end of the process, that is, when the LC is fully colonized, the mycelium will probably start to grow out of it, as you can see from the images.

I guess the best moment to use the LC is before the mycelium start to grow in the white fluffy form inside the jar.

To know how to use the Liquid Culture, stay tuned on ROT !

This site uses Akismet to reduce spam. Learn how your comment data is processed.